A little ice in the harbour during the winter doesn’t slow down this intrepid sailor. He simply chips a path out of the harbour so he can set his sails on Lake Ontario — in early January.

And enclosures, which liveaboards build over their decks in the winter to add some extra living space onboard, just get in the way when you are underway on the lake.

High latitude sailor Richard Hudson, who has visited both the Arctic — sailing through the northwest passage from one ocean to another — and the Antarctic in his 50 ft. steel-hulled staysail schooner called Issuma, didn’t miss his New Year’s Day sail this year.

“I believe in staring the New Year off right and going for a sail,” he says, matter-of-factly, in a phone interview from his other boat, a Grampian 26, that he lives aboard in Frenchman’s Bay in Pickering. His larger offshore yacht is hauled out in Newfoundland.

It’s the second winter living aboard for this Toronto native, who has temporarily shelved his nomadic wanderings to work and save money to top up the sailing kitty and to be with his 98-year-old father, who still lives in his own home with some nursing assistance.

“He’s 98 and will be 99 in August,” says Hudson. “He’s doing tremendously well. He lives in his house with some help.”

When it comes to his sailing, one thing is certain: Hudson doesn’t like to stay tied to the dock for too long. While living aboard in Toronto, he usually manages to sail at least once each month. And that includes the icy and frigid months of January and February in Ontario. It’s winter sailing, Canadian style. Brrrrr.

“I managed to get out sailing, last year, at least once a month. This year, I didn’t get out for February. The weather hasn’t been as kind this year.”

He says with a laugh about ice, snow and cold during the winter months: “It’s annoying that this happens in Ontario.” These winter conditions don’t interfere that much with his sailing, although it may slow him down a little, sometimes.

He and a friend and a few other liveaboards went out sailing following a cold snap in November 2018. They spent three hours busting up the ice to get the sailboat out of the slip, up the channel and into the harbour.

They didn’t sail for long because it was getting dark. They also had trouble with the outboard, which wasn’t drained of cooling water when it was pulled up, and it froze up. They had to use oars to paddle their way back into the slip.

This year’s sail on New Year’s Day didn’t take as long to reach the bay, and after that through the channel and into Lake Ontario.

The cold doesn’t bother Hudson, but the wind and excessive chill are a factor during the winter sailing. “It was both cold and refreshing,” he says about his January jaunt on the lake. “It was a lot of fun. Everyone was dressed for it.

“I like sailing. I want to keep sailing…If I can chip my way out of the harbour in November, I will,” says Hudson, currently looking for some computer work. He is also considering giving lessons to sailors on visiting polar regions.

Hudson has lived in New York City and in the Vancouver area, places that his sailing has taken him. He bought his 50 ft. Damien II sailboat (designed specifically for Arctic exploration) in France, and sailed the boat across the Atlantic.

He negotiated some time off from his banking job in 2008 to bring his boat to North America, but the industry was caught in the throes of the financial meltdown in the U.S. with the sub-prime mortgage fiasco and bank failures.

“In 2008, the banking industry was falling apart. There was no job to go back to. All the banks were in a lot of trouble. I thought it was a good time to go sailing.”

He did the Northwest Passage through Canada’s Arctic in 2011 and sailed to Chile and Argentina and on to the Antarctic in 2016. He enjoys visiting these polar regions.

On his Arctic adventure, Hudson left Toronto in May and went up the Labrador coast and then towards Greenland before heading through northern Canada. This route is longer but it is easier going, since you don’t have to battle through a southward current of 0.5 knots.

There is better visibility on this longer route, with less fog that is common during the spring and summer along the Canadian coast.

Going through the passage, Hudson was able to sail for most of the journey, although he tied up to some docks and tucked into some anchorages when storms whipped up. He headed into a slight current that runs at 0.5 knots through the passage from west to east.

He left in May and arrived in Sitka in Alaska, located near the capital of Juneau, in November of that same year. And docking in Alaska, Hudson gave a huge sigh of relief, elated by not having to stay in the ice over the winter, although he had to provision for it.

He worked for a few years in the Vancouver area and sailed south to San Francisco in late 2014, and into the Pacific Ocean to Easter Island, a remote island that is part of Chile and renown for its large stone carvings with enlarged heads that are called moai.

He passed by Patagonia in the southern summer in 2015 and explored Antarctica, a place he describes as “beautiful and hard….It’s a beautiful, challenging place. It’s like no other.

“I really enjoy the high latitudes. They are spectacular. It can be difficult and unpleasant at times with the cold, wet and windy weather. You have to put up with it. It’s very beautiful to go to places that very few people get a chance to go to.”

Hudson likes to sail with others, but has done some long passages solo, including a trip from Brazil to New York City on his return from spending a month in the Antarctic. He called into South Africa and considered crossing the Indian Ocean, but stayed in the Atlantic. On his way back, he stopped into St. Helena Island.

That remote, volcanic British outpost in the middle of the southern Atlantic is famous as the place where French leader Napoleon Bonaparte was exiled and died.

“I always prefer to sail with other people,” says Hudson. “But it’s a wonderful experience to be alone with myself at sea. There is something very special to being alone.”

Hudson says he’s never been in real trouble while sailing through the ice and cold in the polar regions and describes the environment there as “unforgiving. I would say it’s potentially dangerous.” He adds: “You have to think about and plan for things that might go wrong. Help is not available promptly…most people are too far away from you.”

And what’s in his future? Perhaps another sailing trip to the Arctic, since he’s already in the northern hemisphere. After all, if Ontario doesn’t have enough snow and ice, Hudson knows where he can always find more. Lots more. 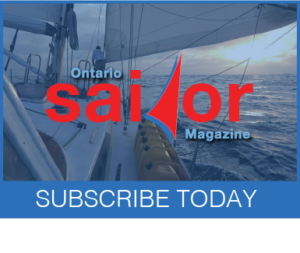